Start a Wiki
"the origin stars when there was a conference, it went wrong and divided celland into 3 , Ground Celland, Heart Cellland, and Nerve Celland. they accidentally met up so they splitted up, then they accidentally met up in a cave and they got trapped including young king heartrum , young king crainium , and young ground cell major. their leaders became frozen inside the cave, all seemed hopeless, until the creator of celland saved the six and they put aside their differences and renamed and joined all three of their lands into celland when they got to a log cabin, they decided to bring christmas to celland and lived happily ever after, the end." 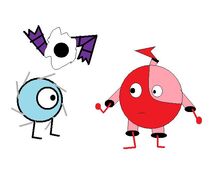 "how do we get our masters to stop fighting?"
Add a photo to this gallery
Retrieved from "https://dylanlisawesome.fandom.com/wiki/Origin_story_of_celland?oldid=4354"
Community content is available under CC-BY-SA unless otherwise noted.